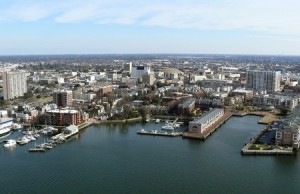 It was quite some time ago I was at a social mixer meeting of the minds here in Jacksonville.  The focus of the discussion was inland ports which was what the bright people in the room knew was needed for the future.  There was ample talk of the growth of JAXPORT that was to come and the need to expand port resources beyond the shoreline.

There were workable ideas that ranged from various versions of inland operation centers connected by rail to one woman who thought it would be a great idea to slide barges into the shallows to use as little container storage islands.  I just stuffed my mouth with shrimp when I heard the barge island concept.  Although one take away I brought with me leaving the gathering was inland ports were a part of the future for the Southeast ports in the United States.

The attractiveness of inland port systems is not hard to see.  Since larger ports tend to be in or near a large metropolitan area, inland ports can ease shoreline congestion by bringing operations further inland to less congested areas.  Also, by setting up operations and distribution centers (DC) near the inland port locations shippers can save a bundle in drayage expense in getting goods to and from the port.  In addition, as truck capacity further tightens having your DC near an inland port location with rail links will be a true asset.   South Carolina, Georgia, and Virginia already built inland port locations and have seen great results.  Jacksonville is still umm… talking about it.

Rail loves inland ports as well and will take the steps needed to be near those inland port locations.  With shrinking coal hauling revenue rail operators not only benefit from seaport /inland port transfers, it also leaves freight in excellent position for intermodal transport into the interior of the country when trucks are not the affordable answer.

For the most part your freight shouldn’t have any more significant handling by routing through an inland port.  There may be an extra ‘lift or three’ involved as containers get loaded to railcars, but containerized moves and lifts should not be a substantial increase in risk if the freight is stowed well.

As more inland ports pop up further and further away from the actual sea port, pay special attention to when your risk ends and begins.  Stating ‘to port’ for the terms of sail may not be as clear as it used to be.  If the shipper’s risk is to ‘port USA’ is that the seaport, the inland port, or where the container clears Customs?  Keeping the terms of the deal clear can only be a benefit to the shipper and the receiver.  Check with your cargo insurance provider if you are in doubt where your risk begins, ends, and if you are covered.  Depending the insurer’s policy wording, you may or may not have cargo insurance coverage from the shoreline port (boarder) and the inland port.