My wife Cyndi and I occasionally shop at a local warehouse store (Sam’s Club) when we feel we need a decade’s supply of bathroom tissue and paper plates.  This past Saturday was the day of one of those bulk procurement trips.  After we finally got around the traffic jam created by the obligatory car parked near the front entrance in the middle of the road waiting for someone to come out of the store and leave the  so they can get a ‘good’ parking spot, we made our way to the front entrance.  ‘Spot waiting’ never has made sense to me. There can be 10 minutes wasted in waiting causing traffic mayhem or only 1 minute of leisurely strolling if they just parked in an already available parking spot… and they choose the waiting?  Even though I am sure there is sometimes good reason, on the surface it looks as though the person is either too lazy to walk or too lazy to get a disabled sticker for their car.  If either is case it is still pretty sad.  The subject is just a pet peeve of mine.  Okay, I’m done now.  Let us move on.

The store routinely lines the entrance area with stacks of special promotion items for us to review on our way to the toilet tissue area.  This day one of the items presented to tempt us in to buying it was a remote control drone selection.  Upon seeing it I immediately thought of the huge cool factor of flying a drone around.  I even foresaw aerial drone combat as an expensive, but so fun it would be worth it, possibility.   Since I am a middle aged man I couldn’t reasonably buy it for myself.  As a reasonable adult I did what I always do when I want to purchase something stupid to play with.  I would say I wanted to buy it for our grandson Wayne.

Right about the time I was going to tell my wife I was buying Wayne a very cool toy he would enjoy very much, my ‘inner risk geek’ kicked in.  There unfolded a whole story line of the risks of what recreational drone ownership could include began to be told in my head.

The story in my head started with little Johnny standing on public property flying his drone equipped with web enabled video.  In the story little Johnny felt zooming in on the people three doors down swimming and sunbathing nude and broadcasting the video to the web was the best use for the drone his parents bought him. 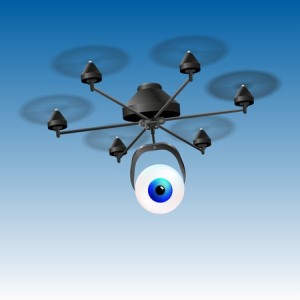 After the video began to circulate on the web clearly showing the identities, among other things, of the people in the pool and sunbathing, the drone malfunctions and begins to fall to the earth.  Unfortunately the drone never makes it to the earth.  The drone instead falls on the head of an unsuspecting child walking up the street a sidewalk on the public right away.

I kept walking past the drone display without saying a word to my wife.  I decided drones, while still having an awesome cool factor, were just not worth the risk.  To make the risk even more unacceptable I am not aware of any off the shelf insurance product to purchase to cover the liability risks of operating a recreational private drone.  Zurich Canada announced they have rolled out insurance coverage for commercial drone use, but the announcement made no mention of private usage.

Little Johnny also brought to light a question in my mind one of you the reader may be able to answer for me.  Where does a person’s right to own and fly a drone begin and another person’s right to privacy end?  For those people who installed privacy fences for good reason, drones may create a problem.  It is quite possible for a drone to not even enter the airspace over someone’s home and still photograph or video the area.  In the wrong hands a drone’s ability to hover in one spot with stability becomes a dangerous tool for the untrustworthy among us.

Since wide spread private drone use is fairly new I am well behind the information curve on the subject I am asking those around me their opinion.  The common first answer I seem to be getting from those I speak to is ‘shooting drones out of the sky’ if it was their backyard was the way to deal with it.  We all know that solution will not end well for the shooter.  Are there laws covering this potential problem?  If not, should there be and if so what laws and resulting punishments for breaking them do you think would be appropriate?    What’s your take?