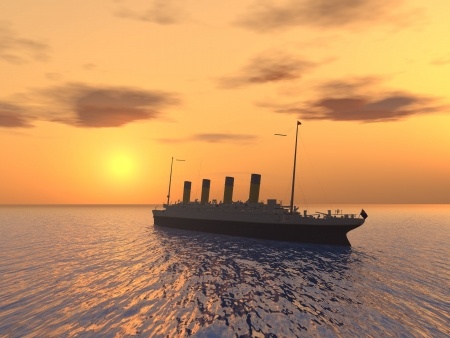 Stories of the infamous Titanic continue to circulate today, over 100 years after its tragic maiden voyage. This is not only because of the lives lost, but also because of the vast amount of wealth that was claimed by the sea—ultimately leading us to wonder: for just how much could the owners of the Titanic be sued?

The surviving passengers of the Titanic were disproportionately first-class, meaning their luggage included all sorts of lavish finery–all of which was eligible for insurance claims. Sunken precious stone jewelry, expensive clothing, and valuable, irreplaceable works of art meant hundreds of thousands of dollars in lawsuits for the owners of the Titanic.

The facilities and amenities aboard the Titanic were nothing short of luxury, too. The Titanic boasted having a heated pool, opulent lounge rooms with grand pianos, a veranda with imported palm trees, multiple libraries, and a state-of-the-art infirmary. Along with the thousands of pounds of linens, cutlery, food, and drink that currently rests at the bottom of the Atlantic, the ship was valued at $5 million, an unthinkable amount in 1912.

Many aboard the Titanic had life insurance policies that covered accidents at sea, which added to the sum the owners of the ill-fated ship eventually paid out. According to newspaper reports at the time, life insurance claims totaled roughly $1.8 million, which equates to over $45 million today!

Let us not forget that any staff members lucky enough to survive were unexpectedly unemployed. While they received no assistance in 1912, employees of such a massive Trans-Atlantic cruise liner today would be owed a considerable amount of compensation.

In total, survivors as well as the families of victims filed insurance claims totaling $13 million for possessions, lives, and assets lost, which is a number that exceeds $300 million in 2014. If this tragedy teaches us anything, then, it’s that the dizzying amount of potential lawsuits involved in a sunken ship make it worth your time to insure both your cargo and your commercial liability.