Have I ever mentioned I am a little obsessive? Not obsessive about everything, just some things. I drag my forgiving wife Cyndi to many places she really does not want to visit to see things she really doesn’t want to see, but I just ‘had to see it’. From the ruins of colonial towns and forts to vintage auto museums, Cyndi is a good egg and goes with me when she really would rather not.

One place I put on my ‘must see’ list was the ATS Terminal in Jacksonville Florida. I spared Cyndi on this occasion. The terminal itself wasn’t what I had my sights set on; it was one of the terminals possessions. The coveted ‘Pop Top Container’ was my target. If you don’t know what the Pop Top Container is, you didn’t read the article I wrote in November of last year called ‘Hats Off To a New Type of Shipping Container’. Apology accepted. For those of you who didn’t read it, here is a link to the article https://www.tjocargo.com/hats-off-to-a-new-type-of-shipping-container
for you to get caught up. You go ahead and read the rest of us will wait.

All finished? Good, we can move on now. Now you know what the Pop Top Container is you can understand why I would want to see it. To a cargo risk mitigation nerd this container is a big deal, so I begged my way to an invitation to see the prototype container up close and personal. I traveled to the ATS Terminal which isn’t far from me and I met with ATS Terminal Manager Brandon Nelson and Director of Marine Operations Maritime Steve Hastings on January 18th 2017. After pleasantries and general conversation the subject I was there for came up and there was no shortage of questions and answers.

My first question was what does it weigh? The total number comes in at over 20,000 po 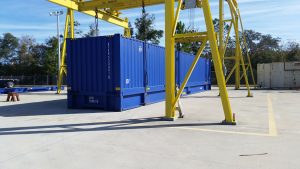 unds. Knowing what I was thinking Steve piped up and let me know there is already work in progress to peel off some of the weight as well as other improvements for the final design. Moreover, the envisioned use of the container has the ‘top on’ during ocean transit and ‘top off’ during the inland delivery which would peel over 10,000 pounds off the total during the inland transport. Yep, the conversation was getting cooler as we went. The planned usage isn’t static y 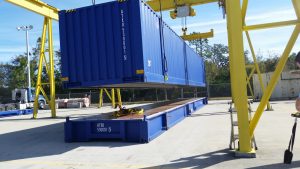 et, but the uses are firming up as every day passes. The needs of the shippers using the container will drive the evolution of how the container will ultimately be handled. Just one of the scenarios presented by Steve and Brandon has the container bottoms and tops being married up similar to how a chassis and standard containers are connected for tracking. Both the bottom and top will have a control number, but don’t necessarily have to remain together as they are interchangeable.

Picture a shipper with long bundles of pipe or lumber ready to ship to the port. The container hauler would simply go to the port like they would for a normal empty container or flatrack, but instead would pick up a Pop Top Container base (bottom) with no top. From there it’s off to the shipper who would load the commodity on the base in the same manner they would load a flatbed. The difference being the shipper also will be covering the freight if they wish and then securing the commodity to the base using the many tie down points built into the floor. Once loaded and 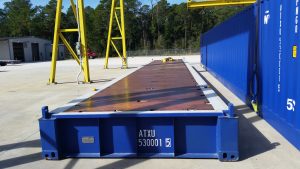 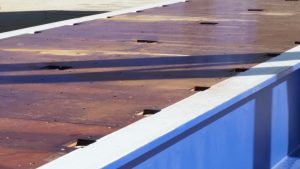 secured, the truck hauls the loaded base back to the port where a top portion of the container is dropped on to the base with a container stacker and locked tight. Now the loaded container is ready for the stack. No crates, no stevedores for lashing, no breakbulk, no exposure to open air for the ocean transport, and no kidding. 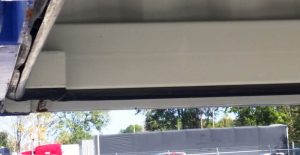 My next question was just how weather proof are these containers? Brandon jumped into action and outlined for me why the system lives up to the advertising. He lifted the top up for me to see the heavy rubber seal that ran completely around the bottom edge of the top potion of the container. Brandon also noted where the top and the bottom come together, the top overlaps just a little as added protection. At this point Steve hit my personal hot button, security. Most thefts from standard containers occur right through the door. The beauty of the Pop Top Box is there is no door. This feature reduces the risk of theft by a significant margin. If authorized access is required at the port the top can be removed by a container stacker.

The current configuration of the container is a 53’ x 102” high cube so I asked about what other configurations may come. Steve had the easy answer for that by stating “whatever the market demands”. The obvious uses for the container are long breakbulk fright like lumber, pipes, and machinery, so the 53’ makes quite a bit of sense. Although it’s not out of the question a 40’ or even a 20’ could be introduced for shippers looking for added security for their shipments or easier loading of odd shaped freight that formally would have been dropped into an opentop. I believe the lines will also embrace the concept once shippers create the demand. The container will be a great space saver on vessels as none stackable freight will suddenly become stackable. More space, more freight, more freight, more money.

It was time for me to leave. For the most part I had a great visit and was quite impressed by the Pop Top container. My biggest letdown was no matter how many times I called the innovation the ‘Pop Top’ container, Steve and Brandon were unrelenting in calling it the ‘Breakbulk Box’ no matter how much I tried to sway them. For crying out loud, it’s just a name. Down deep they know my name is better. Oh well, give it time. I am quite sure once the container is in broad use by the industry there will be a grassroots movement to embrace the name that describes it best, the ‘Pop Top’ To find out more about the ‘Pop Top’ Container, you can call Steve Hastings at 320-258-6387 to go straight to the source.